The announcement of the shut down of Empire State Pride Agenda is a difficult one to understand as a member of the transgender community and as a person who has supported Pride Agenda for many years w/ my dedication and passion for the work they do.

While knowing personally many members of their staff and board of directors, I can’t help but feel betrayed by the people who are supposed to fight and protect my community and myself. Especially when we know that the work needs to be done still to advance the LGBT community to be completely equal and protected under the law in many ways in our own state and across this country.

We still have so much work to do for the community for issues like GENDA (Gender Expression Non-Discrimination Act) that still needs to be passed regardless of the executive order. We still need to ban conversion therapy for our youth and pass the Child-Parent Protection Act so that LGBT couples can feel free to create their families how they choose too. We still need to fight for our LGBT Homeless Youth and make sure funding is given to those organizations that work with at risk populations. These are just some of the things we need to do, I hope ESPA will reconsider their decision to shut down.

Today Elected Officials from New York State, New York City and various community members and New Yorkers came out w/ the following message to be made loud and clear to Donald Trump.

Don’t let Donald Trump and his frighteningly fascist positions make the rest of the Republican field look mild in comparison.

Let’s ask the media to stop giving him a platform he never earned!

Let’s insist that the Republican National Committee denounce him and his hate speech!

Join us tomorrow as we publicly demand in one voice that he stop his campaign!

Hate mongering has no place in our city! Enough is Enough.

New York City represents the diversity of this country, of voices that are strong enough to shout him down! 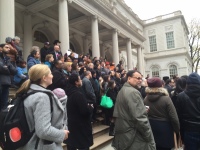