This was my testimony last week at the first hearing of the Education Committee (K-12) under the leadership of Chairperson Daniel Dromm.

It is a great honor and privilege to be here today and to speak with you on a subject that I have hoped would come to the attention of the New York City Council. If you have never met me before, my name is Bryan Ellicott. I am sitting before you not only as an out and proud transgender and bisexual man who is involved with many different efforts within the LGBT community and outside it, but also as proud adult who went through the New York City public school system on Staten Island.  I went to Public School 42 (same as Councilmember Ignizio), Paulo Intermediate School 75, and South Richmond High School, where I graduated from in June of 2008.

However, the person that sits before you today didn’t exist back then, but it wasn’t for a lack of trying. I tried so many times to find the words to express who I knew I was supposed to be, but I was told “that can’t be, it’s not normal, maybe you need to rethink this”. Or my personal favorite: “but you’re such a nice looking girl, why would you want to do that?” It took me years to figure out that it wasn’t just me, that I wasn’t the only one going through something like this. Being a teenager is hard enough when people think you’re normal, but not having the proper terms and knowledge to express yourself makes adolescence that much more difficult.

Every year we’d be taught about the contributions of the Women and African American heroes and activists of our great country. It always made sense why: they took on the impossible odds and they are remembered for their achievements and for the trails they blazed for others. People like Rosa Parks, Elizabeth Cady Stanton, Susan B. Anthony, Eleanor Roosevelt, Dr Martin Luther King, Jackie Robinson, Nelson Mandela, Fredrick Douglass, and others have made their way into the history books and been held up as heroes by generations of schoolchildren.

A little LGBT history would have made it seem like I wasn’t the only one with the things in mind that I thought was just another crazy idea. History and politics were always my thing. It’s where I could point out to my teachers that loud and obnoxious people do change the world.  It wasn’t until college that I learned about the Stonewall Riots, Harvey Milk, ACT UP, the statement made at the 1980 Democratic National Convention that officially included the party’s position on LGBT rights, and the story that is Don’t Ask Don’t Tell, among other things. In recent months, the story of Edie Windsor’s battle with the Supreme Court and the signing of Jason Collins, the first openly gay NBA player, to the Brooklyn Nets have made headlines. And there will be more stories like this, stories of coming out, dealing with oppression, and eventually overcoming the obstacles faced by millions of LGBT Americans every day.

We have so much history with the LGBT and HIV-AIDS movement in our city. Our city has made some great contributions politically and non-politically. Those things deserve to be taught, because there will always be that child in the class who has learned or read something and they have just been given a reason to try and change the world for the better. There will also always be that child in the classroom who thinks they are weird or crazy or alien for the way they feel, and that child deserves to know that there are plenty of other people out there like them, people who have made a difference in the world without having to hide their truth. New York City has a great opportunity here to use its history to educate its children, and it is time we used that history to our fullest advantage to make our classrooms more inclusive. 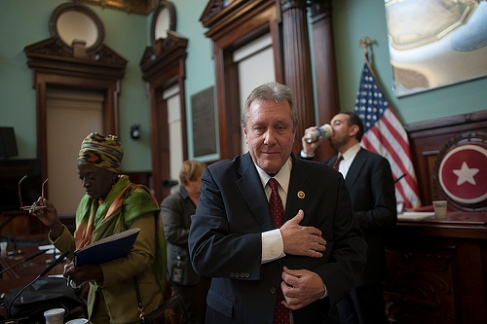